Entry #3 What I Did On My Summer Vacation 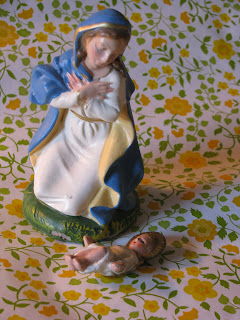 A big part of the “What I Did On My Summer Vacation” series is the picking experience itself. There is the drive, short or longer. There is the accompanying loud music played on the car stereo, and the stops at local bakeries for sustenance. But equally important are the conversations, both the ones I participate in, and the ones I overhear.
This week while visiting a particularly fertile hunting ground(i.e. – a local dump), I was joined by several others who were happily picking away. Two of the women seemed to know each other, and were chatting about this and that. A man came in that one of the women knew and they exchanged greetings.  Then the first woman, I will call her Alice, said to all of us present, “did you know that George here was the one that saved that baby’s life a couple of years ago. He was written up in the paper and was on the news and everything.” “Yes”, said George proudly, “that was me alright. It was June, 2008.” Then Alice proceeded to tell us about George’s valiant deed. Apparently, there was an infant with her mother out at a public place somewhere. The baby stopped breathing suddenly and was starting to turn blue, and no-one knew what to do. George stepped up and said, “ I know CPR, let me try.” And sure enough, he did mouth to mouth resuscitation on that baby and saved its life. While this conversation was taking place I was listening and also continuing to look at the objects that were displayed. Just as I was picking up a figure of Mary and baby Jesus from a discarded Crèche scene, George spoke again. “Yes”, he said. “The Lord wanted me to be in that exact place at that exact moment.”

Mary and Baby Jesus came home with me that day.
When I got home I did a little research. See link below.