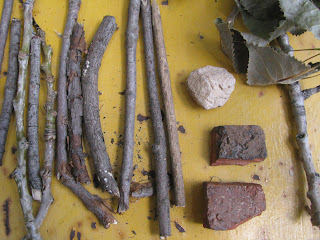 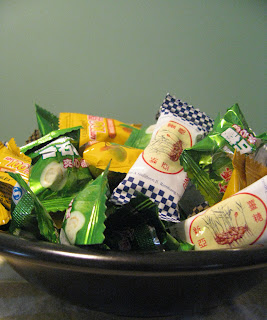 Well this past weekend was filled with the magic of the hunt.

I began on Friday gathering sticks and stones down by the Winooski River near the River Walk. I made a small collection. I have some ideas for them but nothing certain. When I got home I took a pen knife and sat on the stoop and scraped off some of the bark. I enjoyed this girl scout moment.

I also made my first cold call to a Winooski business with great results. The nice young woman at the Pho Dang Vietnamese Restaurant on Main St. gave me a generous container full of candies in vivid colored wrappers. I have begun to take the wrappers apart and investigate their sculptural properties with needle and thread.

On Saturday the magic kicked into full gear with an intuitively driven stop at a yard sale held by the retired Catholic nuns at Our Lady of Providence.
There were many wonderful treasures to be found there. Most stunning was a 1950’s era Singer sewing machine in the cabinet for a pittance. It is very similar to the machine my mom had when I was a girl. After I set up my studio at the gallery several days before, I had said to a friend – “now all I need is an old fashioned sewing machine to connect me to the Winooski Mill’s textile history”. Voila!  Thank-you sisters!

This machine was very well cared for and included all of its attachments (no pun intended) and its manual. The previous owner obviously cherished this machine. I could tell by the way all the items were carefully placed in the drawers, including a couple of packets of silica gel, to keep away moisture.

While at the sale I ran into a nun who I had worked with back in 1976 and had not seen since, Sister Marie Charlotte. We were lucky enough to both be part of a group that spent a week at Shelburne Farms, living together, cooking and eating together, and making art all day. It was an experimental program at the time, testing out whether the great house could be used for purposes other than single-family occupancy. All the participants were either from the Department of Education, the Vermont Council on the Arts, or were arts grant recipients.

I was right out of college and was working as a graduate intern in the department of education and was fortunate to attend as part of my job. I chose the dance focus, and each day we did modern interpretive dance on the south porch and the lawns of the estate, swooping and prancing through the gardens and down to the lake. Think Isadora Duncan. What an experience.

I later was assigned to Sister Marie Charlotte’s program and paid her a visit at St. Francis Xavier School where she was the art teacher. She had written a grant to use microscopes to explore nature as inspiration for her students. They examined all kinds of things through the lense and then created drawings, paintings, sculptures, and stitchery. I thought it was a really cool project at the time (still do). What an interesting juxtaposition running into  sister Marie Charlotte all these years later while out gathering things for my art series.

While delivering the sewing machine to the gallery right afterwards, several pieces of burned newspaper blew by my feet, including the burned personals – yup, you heard me – the scorched personals page from Seven Days. You can’t make this stuff up. Of course I stuffed this in my bag for later.

One other visit of note, not in Winooski, but heck, I was on a roll so I drifted over into Colchester, where I found an overhead projector, again for a song. Now I have wanted to own one of these for some time for teaching and art making. Years ago, I had borrowed one from a city department and taken it into the preschool classroom for several projects with the kids. They loved the magic of it. At the end of that year, I interviewed each child for “About The Artist” bios for their preschool art show. One of the questions I asked was “what was your favorite medium”.  Children responded with all kinds of things -paint, clay, printmaking etc. But one boy, when I put the question to him said simply “light!”.

I asked the man who was selling it at the garage sale what he had done with the machine. He said he used it to teach. I inquired what he taught with it and he said “celestial navigation”. Yup –I’ll say it again – you just can’t make this stuff up.