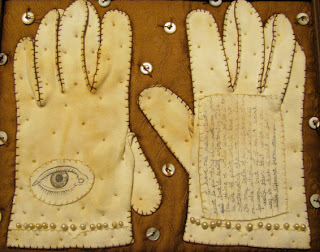 This piece is entitled “Fourteen”. It is one of my earliest textile pieces having been created in the mid-eighties. I had gathered vintage gloves for a year or more and stashed them away for a series yet to be determined. This was the first piece I created with them. I tea-dyed them and bleached them and tea-dyed them several times to get them just the right shade. I was using the French knot a lot at the time so I embellished the gloves, which created the slight undulation on the surface which I quite liked.  Around that time I had seen some artwork (Northwest Coast Native American Button Blankets) created with lots of little buttons so I dipped into my button collection. The all-seeing –eye had appeared in some other works of mine at that time (along with the heart and brain – a triumvirate of recurring symbols) so I did an early Xerox transfer.  Around the edges of the gloves and the eye I did some blanket stitching – my favorite stitch learned as a Brownie in my youth. Things were moving along nicely when I got a strong urge to incorporate something into the piece that had been written in my own hand from childhood. I did not know if I had anything in the house but I began to dig in the back of the closet. There in a box of old photos I found an essay I had written in Jr. High School for a class assignment. It was an autobiographical essay entitled “Me, Myself, and I”. I had no recollection of writing this piece and yet there it was. It is hard to read it in the photo but the paragraph I chose says something about how I am “just another nice girl” (?!) but if I could be an artist when I grow up it would give me something that would make just a little bit different. WOWIE! SHAZAAMMM!!! This is the magic of  the creative process.  I went on to create many works with vintage gloves, some I have sold, but I have never been able to part with this piece. It is my totem.
Below is a link to view some examples and more info. on the Northwest Coast Native American Button Blankets.
http://www.freespiritgallery.ca/basketsblankets.htm
Posted by Jude Bond at 3:53 PM