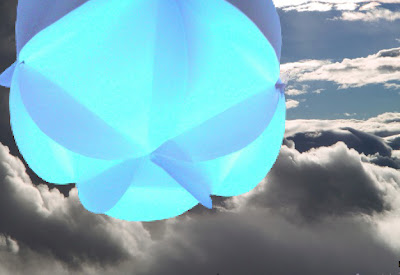 This week I have been thinking about group art projects, collaborations of sorts, where each person makes one component, and when put together, these components create something that becomes much more than the sum of the parts. I began thinking about this for my college level art education class. I wanted to
create something that could hang on the wall or sit on the seminar table and remind us that we are a group, each with our own ideas and visions, but together capable of great things.
I like to make art projects as a group that enhance a physical space that the group will be sharing for a time, while making art, discussing the making of art, or pondering the teaching of the making of art.  During my investigation of the sculpture idea I had for the college students I realized that with some preparation on my part, the preschoolers could create a similar sculpture together.
In order to prepare an activity for four and five year olds that  could be completed in the allotted time I would need to do several of the steps ahead of time. This is often the way it is with this age level. In my experience it is usually worth it, both for the process they will experience, and for the finished piece or pieces. If I were a classroom teacher working with students over several days I could
have them work on components and then construct the whole together. But as the “Project Lady”, arriving once a week with my bag of tricks for an hour or two, the magic needs to happen Presto! Pronto!
I set about tracing and cutting the circles for the paper sphere pictured here. It takes twenty circles to make one sphere.  That’s twenty circles to cut, and twenty triangles to trace onto the circles, and sixty folds to fold. I wanted enough to make two complete spheres for the class so double all that. It was a bit of a job, but then again I like repetitive tasks so this was not a problem. I wanted these components to be ready to go, so all the students would need to do is draw on them to make them special, and then I could glue them up one at a time and they could watch the sphere take shape.
I had never done this project with students of any age before so I crossed my fingers, loaded the markers, paper circles, and glue sticks into my bag, and headed out hoping for the best. After a rhythm game or two with the group it was time for the demonstration. I showed the completed sphere I had made – all in white. I explained how the individual components went together to create it. I took a few individual circles and glued them together while they watched, so they could get the idea. They were ready to go. But first, I asked for questions or comments about the project before we left the circle, just in case. One little girl raised her hand and asked “didn’t you get tired of cutting out all those circles?”  “That is a good question” I replied. I went through the math with them and explained all the steps, but then told them that it was worth it because it was going to be something real special when we finished it and hung it up in their classroom. And off they went.
Sure enough, they were immediately engaged. Some of them colored solidly all over their circle, some drew images, and some did a combination of the two. I sat at one table and had them bring the circles to me as they completed them, so I could glue them up immediately and they could watch the sphere taking shape. Some of them sat with me and watched, quite enthralled. Some of them watched enough to get the idea and raced back to their seats to make more to add to the piece. Some expressed preferences as to the placement of their circle, ”put mine next to Chelsea’s”, or “put mine next to a pink one”. I was happy to oblige.
When the sculpture was finished one of the classroom teachers punched the hole and hung the string and carried it around the room showing it to all, and enlisting their advice in choosing a special place to hang it.
The paper sphere fulfilled all my wishes for a successful project. It engaged the children, taught them something new, introduced them to the idea of a collaborative artwork, and helped to enhance the classroom with their creation.
The experience had an impact on me as well. Of course I felt happy that it had gone ok, and that I could provide a positive arts experience for the children. But as with most art teaching experiences it also gave pause for self-reflection. The child’s question in the circle about whether or not I got tired of cutting out all those circles made me think. I thought about why it was that I was interested in doing that kind of preparation just to provide that experience for the children, just like all those hard working early ed teachers across the globe. I thought a lot about my love of repetitive tasks, and their meditative nature. It is no wonder I choose to do the kind of  artwork I do, stitching millions of hand stitches with crochet hook and yarn or needle and thread.
I also found myself pondering the collaborative aspect of the activity. A simple project can bring such satisfaction to a group, no matter what the age, either the age of the participants, or the age or era in which it takes place. I thought about barn raisings, and quilting bees, and my place in the history of makers.
Posted by Jude Bond at 6:37 AM